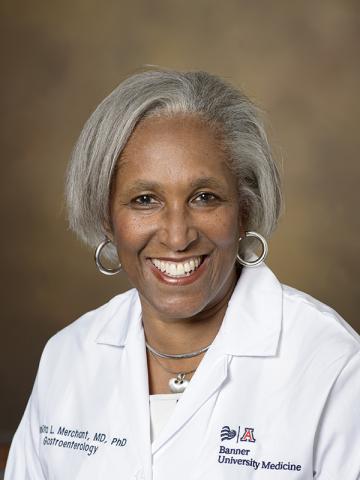 Dr. Juanita Merchant, joined the faculty at the University of Arizona College of Medicine – Tucson in July 2018 as a professor of medicine in the UA Department of Medicine and chief of the UA Division of Gastroenterology and Hepatology. Dr. Merchant earned her MD and PhD at Yale University School of Medicine (MSTP), has written or co-written more than 120 peer-reviewed research publications, and is editor or co-editor of four books and several book chapters. In 2016, she was appointed to the Board of Scientific Counselors for the National Institute of Diabetes and Digestive and Kidney Diseases. Additionally, she was recently elected to the National Academy of Medicine Council. Dr. Merchant is a co-PI on the NIH-AGA FORWARD program which was developed to increase the number of academic gastroenterologists from under-represented groups.  Dr. Merchant served as MSTP Associate Director at the University of Michigan and is also a member of the national advisory committee for the Harold Amos Medical Faculty Development Program.  She has remained continuously funded by NIH for her work on gastrin and neuroendocrine tumors;  hedgehog signaling and gastric cancer; and transcriptional control mechanisms in colon cancer.

The research focus of my lab focuses on the molecular mechanisms underlying normal and pre-neoplastic epithelial cell growth in the luminal gastrointestinal tract. Our recent studies involve the use of animal and cell culture models to dissect the pathways through which chronic inflammatory processes, generally from bacterial colonization leads to mucosal alterations in the luminal GI tract that set the stage for neoplastic transformation (pre-neoplasia). Ongoing projects in my laboratory include the role of sonic hedgehog in gastric gastritis leading to metaplasia/dysplasia; the role of the nuclear protein menin in the genesis of neuroendocrine tumors, e.g., gastrinomas, carcinoids, and the role of the Krüppel-like transcription factor ZBP-89 (ZNF148) in mucosal restitution from infection to neoplastic transformation.