UA Cancer Center at the Forefront of Vaginal Microbiome Studies

Every nook and cranny of the planet and its inhabitants is covered by an assortment of microbial species. Microbes get a bad rap, but only a fraction of them cause disease, while the rest of them are mostly benign. Some microbes, however, are crucial to human health, coalescing to form the microbiome — the community of microbes that take up residence in the body. Research into the human microbiome is receiving a flood of attention for its potential role in every aspect of health. 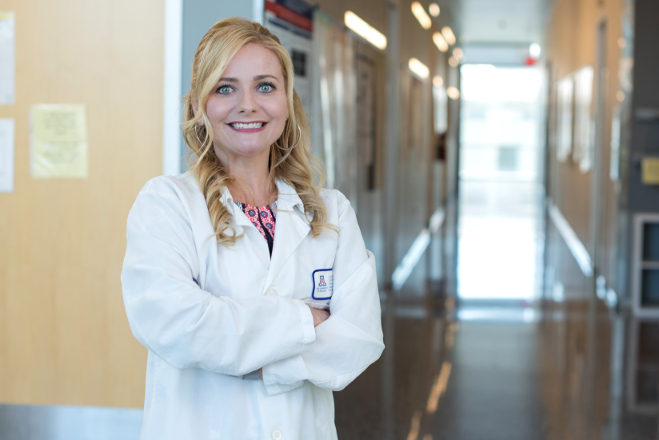 The UA Cancer Center’s Melissa M. Herbst-Kralovetz, PhD, leads the Women’s Health Microbiome Initiative, an ambitious undertaking that seeks to uncover connections between vaginal microbiota — the microscopic organisms that reside in the lower reproductive tract — and women’s health. The Initiative, based at the UA College of Medicine – Phoenix, brings together a team of researchers who are investigating how the vagina’s microbes interact with the rest of the body to promote or harm women’s gynecologic, reproductive and obstetric health.

Vaginas are diverse ecosystems that include bacteria that block disease-causing germs from establishing their own colonies. The bacterial species Lactobacillus — related to but distinct from the beneficial bacteria found in yogurt — plays a major role in regulating the vaginal pH, creating an acidic environment that is hostile to the microbes responsible for diseases like trichomoniasis and bacterial vaginosis. However, when the vaginal ecosystem is thrown off balance — a condition called dysbiosis — the vagina may be more susceptible to disease.

Dr. Herbst-Kralovetz’s lab focuses on the way a dysbiotic vaginal microbiome could promote inflammation, which is a factor in the development of cancer. Although inflammation is a normal part of the immune response, in which the body fights against injuries or infections, chronic inflammation can damage tissue and DNA, laying the groundwork for tumor formation.

“The relationship between inflammation and cancer has been clearly established,” Dr. Herbst-Kralovetz says. “However, the role of microbiota in promoting inflammation and tumorigenesis, especially in the genital tract, is not well understood.”

With so many questions in need of answers, Dr. Herbst-Kralovetz’s lab is at the forefront of some of the most exciting research being done at the intersection of the microbiome and women’s health. A recent grant from the Mary Kay Foundation is supporting explorations of the link between the vaginal microbiome and endometrial cancer.

Endometrial cancer, which occurs in the lining of the uterus, places in the Top 10 cancer types in the United States and is projected to cause nearly 11,000 deaths in 2017, according to the National Cancer Institute. The causes of endometrial cancer aren’t known, making investigations into its etiology both important and interesting.

“We want to be able to address the relationship between the genital microbiota and level of genital inflammation in women with and without endometrial cancer,” Dr. Herbst-Kralovetz says. “We hypothesize that dysbiotic vaginal bacteria could ascend to the upper reproductive tract and influence the local microenvironment, possibly through inflammation, to drive carcinogenesis.”

Previous research by Dr. Herbst-Kralovetz has found that changes in the vaginal microbiome may be associated with inflammation and endometrial cancer, but these connections aren’t clear.

“We are really at the ground floor with this research,” she says. Her lab could be the first to clarify the association between the vaginal microbiota and endometrial cancer risk, particularly when it comes to questions about causality. For example, women being treated for endometrial cancer are less likely to have thriving Lactobacillus communities in their vaginas. Is the imbalance in their vaginal microbiomes a cause of cancer — or is it an effect of cancer, or even of its treatment?

“Causation is always tricky to establish in microbiome studies,” says Dr. Herbst-Kralovetz. “Our Mary Kay Foundation grant will allow us to generate foundational studies that we can build upon in the future to better address the question of causation. We are at an early stage, but if we know what bacteria might be acting as ‘drivers’ or ‘passengers’ in carcinogenesis, we can study those individually or as communities to understand how they are functioning to alter the local microenvironment.”

The research being done in Dr. Herbst-Kralovetz’s lab could lead to better ways to treat and prevent cancer. For example, microbes might interact with cancer treatments in positive or negative ways. Clarifying the relationship between the microbiome and the effectiveness of different cancer treatments can help optimize the therapies administered to patients.

Additionally, knowing more about the relationship between the vaginal microbiome and cancer development could lead to methods to detect cancer in its earliest stages, paving the way for minimally invasive treatments. Think of how the Pap test enables cellular abnormalities in the “precancer” stage to be caught early, allowing cervical cancer to be treated before it even develops — perhaps in the future, an analysis of the vaginal microbiota can help detect microbes that might predispose one to cancer development.

Finally, if some vaginal bacteria species are found to be protective against endometrial cancer, perhaps they could be harnessed for cancer prevention. Will consumers someday ward off cancer and other diseases by colonizing their vaginas with store-bought “probiotics” — beneficial bacteria? How about “prebiotics,” indigestible carbohydrates that are thought to nourish beneficial bacteria and help maintain healthy microbiomes?

“Bacterial therapeutics are an exciting new area of research,” Dr. Herbst-Kralovetz says. “These new therapeutics include probiotics, prebiotics, and even bacterial metabolites or combinations that could re-establish the resident microbiota and homeostasis at these sites.”

But when it comes to supplements like probiotics and prebiotics, there’s a huge gap between what’s commercially available and what is backed by science.

“Mechanistic studies and robust, randomized, controlled studies are required to test the efficacy of these therapies,” says Dr. Herbst-Kralovetz of the potential of bacterial therapeutics for vaginal health.

Many people see bacteria as bad bugs that need to be banished from the body. And, while the antimicrobial powers of sanitation and antibiotics are counted among the Top 10 public health achievements of the 20th century, the 21st century is witnessing a growing appreciation for the benefits bacteria can bring. As Dr. Herbst-Kralovetz’s lab discovers more about the vaginal microbiome, a clearer picture will emerge of how microbes can protect health, help detect cancer in its earliest and most treatable stages, and enhance cancer treatment.

Gene Variation May Be Early Indicator for Gastric Cancer